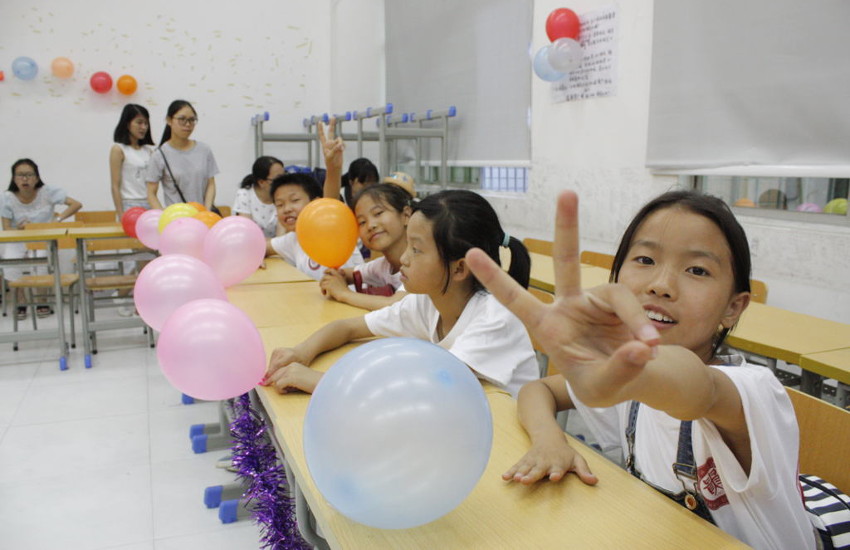 “The most valuable outcome from this activity wasn’t the result. No, it was simply the fact that these students were willing to give of their own abilities, time and knowledge and give something back to society. This is exactly what the program University for Girls has promoted, and is our greatest hope for students.” These are the words of Mr. Tan Langdong, who oversaw the project. “University for Girls” is a student scholarship program, which provides support for female students from difficult backgrounds.

In July this year, a group of young women studying at Guizhou University who are beneficiaries of the University for Girls scholarships decided, of their own initiative, to organize a summer camp for kids. It ran over five days and four nights for 15 ‘left-behind children’ from two elementary schools in Xingren county. It was the first time that most of the young participants had ever been out of their own village. They enjoyed many new experiences. Of course, it wasn’t’t just the children who experienced a lot of ‘firsts’ – it was also an incredible ‘first’ experience for the young women who organized it and who are recipients of the University for Girls support.

Xiaoyan, a student at Guizhou University, came up with the idea of running this project. She got some other students to work with her on it. Xiaoyan explained, “In the beginning, we just thought it would be good to help others in some small way. We took on what we thought would be an easy project because we didn’t have any experience. We did not want anything too challenging for us to handle.”

However, once they began to actually plan and then to carry out their ideas, they realized that running a summer camp was a lot more complicated than they had expected. Planning activities, recruiting participants, coordinating with other organizations and actually running the program wasn’t easy and the coordinators quickly discovered that they were out of their depth. Xiaoyan, felt she lacked skills needed in just about every area required for such a role. “Organization and coordination are two areas I especially need to work on. My ideas aren’t broad enough – I don’t think things through thoroughly. I’m not good at seeing the whole picture and planning accordingly.” Thankfully, the university students kept in contact with Amity and the Guizhou University throughout the whole process, and they gave the students counseling and support. In the end, everything went very smoothly.

We know how these children feel

They thought that the children needed to rely on themselves in six ways. Xiaoyan explained, “This includes continually working at improving themselves, being diligent in their studies, taking care of themselves, protecting themselves, being strong in themselves and self-disciplined. We hoped that the camp would provide the children with a great atmosphere in which they keep improving academically, personally and which would contribute to good health for them in both body and mind. We wanted to encourage the children to receive new things with an open heart. We hoped that the children would learn that they can pursue their dreams. At the same time, the women in our University for Girls group also ‘grew up’ together through this opportunity to work and learn together.”

They brightened up our lives

In terms of gain, Xiaoyan pointed out that she gained a lot from both those with whom she worked and the children. “Working together on this activity was a great way to spend time with one another. We had not really done much together before this. We have come to understand one another so much better now, and we have made some really interesting friends. These friendships have enriched our lives. And then there are the children who participated in the activities. We learned a lot from them too. The happiness we experienced working with the children is something we could never get at university. They are full of hope for a bright future.”

Mr. Tan, who was responsible for this project, believes that the value of this camp was not in the activity itself but rather in the changes that had taken place beforehand so that these young women were willing to work hard and run the program. “One person is limited in what they can do. The strength of a charity organization is limited too. What will bring real change to society, however, is recipients of help expressing gratitude and a desire to help others. That ignites hope in society. The University for Girls students have gone from just being willing to help to actually doing something. This is a real breakthrough. Quite apart from any program or results, just the ‘igniting of the flame’ is so significant – it is like passing the baton from one generation to the next. The value of this far surpasses everything else.”

You are donating to : Those who receive give back