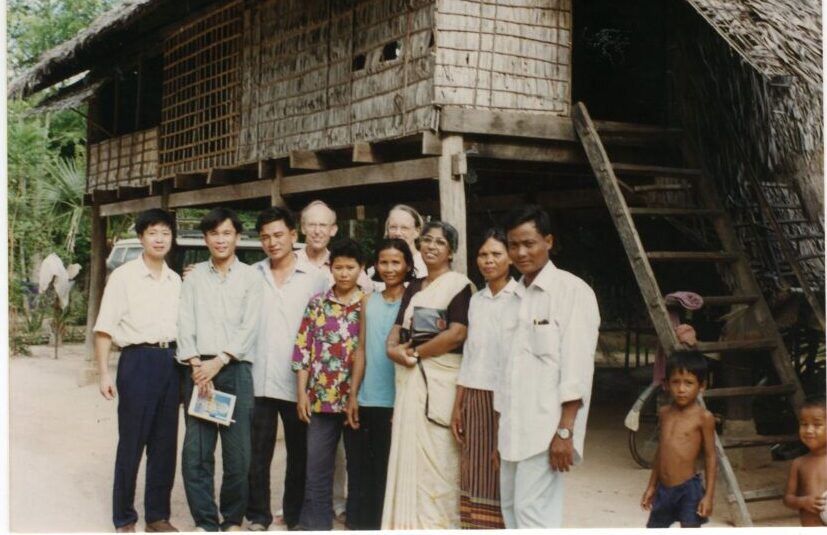 In part two of his interview, Mr. Qiu Zhonghui, the Board Chair of Amity Foundation, outlines the key players of social work in China, the history of Amity Foundation and the general development trajectory of social organizations throughout the years. (Part One / Part Three)

The interview was slightly edited for better understanding.

The Chinese People’s Political Consultative Conference (CPPCC) is a unique political consultation mechanism in China. The CPPCC functions as a key platform for all sectors of society to offer views and raise proposals to the Communist Party of China and the government.

First of all, the CPPCC is a platform to understand the general policies of the Party and the government, to unite people from all walks of life, and to facilitate social cohesion. As an important part of society, social organizations should actively study and understand the guidelines and policies of the Party and the government, as well as investigate the challenges in social development. Such research plays an important role in maintaining the effectiveness of our work.

Secondly, it is a platform to exchange information and resources. The CPPCC holds annual conferences lasting for at least about one week. This event gives representatives from all sectors more opportunities to communicate and exchange, from which I have greatly benefited.

The CPPCC provides representatives of social organizations with insight into the Party and government policies, as well as with a macro view of social development. At the micro level, we can use this platform to voice the actual needs of grassroots communities, and communicate the views from various sectors of society to the government. In relation to our work, we can establish close contact with people from all walks of life, as well as the leaders of the Party and government departments. Through CPPCC meetings, we can interact and share our work with these parties. Finally, we can use this platform to speak for the development of the sector.

To promote the healthy development of social organizations, I suggest that the CPPCC should gradually establish a special sector for social organizations. Although this may take time , I believe that with our commitment increasingly getting recognized by the Party and the government, this opportunity will come.

Our sector has not been fully developed, so we have to continue working diligently to meet the needs of society. Only through hard work can we be “seen” , and hence are able to do more for the society. At the CPPCC, I submitted several proposals on issues such as social organization cultivation and services for the elderly. As a representative of this sector, I am obliged to speak for it. It is vital for the development of social organizations to participate in political consultation.

Philanthropic undertakings, especially foundations, are a product of China’s reform and opening up, as well as its economic and social reform. In 1981, more than ten civil groups jointly launched the first foundation in China, which was a landmark event. In the early days of the reform and opening up, Deng Xiaoping was so impressed after visiting the United States and Japan that he later sent a large number of people abroad to study. Mr. Zhu Chuangyi was among the first to go overseas and submitted a report when he returned. They observed that that American foundations, not yet existent in China, were very different organizations. They were large in numbers and played an important role in social development. These findings led to the establishment of the first Chinese foundation in 1981.

The Amity Foundation was established in 1985. However, according to the older generation in Amity, discussions about its establishment as a social organization actually started as early as 1979. Thanks to the implementation of the policy of reform and opening up, as well as freedom of religious belief, Amity Foundation came into being after a long period of preparation, with the support of the leaders at all levels at that time. The founders of Amity Foundation were not only Christians, but also some prominent members of the community, such as Mr. Kuang Yaming, Ms. Wu Yifang and Mr. Chen Yuguang, who served as honorary chairperson in the foundation, as well as Mr. Su Buqing, who is a famous mathematician and served as our director.

After their introduction as social organizations , foundations developed rapidly for a period of time. In order to regulate the management process, the “Regulations on the Management of Foundations” was signed by Premier Li Peng and issued in 1988. At that time, foundations were included in the financial system and administered by the People’s Bank of China. This can be seen that our government’s understanding of foundations is also changing.

In late 1990s, foundations began to consider promoting the formation of a federation or umbrella organization. Until the beginning of the 21st century, as the sector was only starting to develop, there were not many practitioners, and many issues needed to be discussed thoroughly, mostly centering on the topics of self-discipline and transparency of the sector. This was due to two reasons. One was that charity properties belonged to society, and foundations only functioned as trustees. They needed to be transparent and self-disciplined in order to gain trust and support from society. Another reason was that the foundations were new things. To reassure the government and society, we must do a good job in self-discipline and sector building.

After the earthquake in Wenchuan, Sichuan Province in 2008, the government emphasized on social construction, and paid more attention to social management and innovation in governance. In the years following the earthquake, NPI (Shenzen Non-profit Incubator) and Amity worked particularly in this area.

The Guo Meimei incident (a scandal that dealt a blow to the reputation of the Red Cross Society of China. For details please refer to http://www.chinadaily.com.cn/opinion/2011-07/15/content_12912148.htm ) in 2011 prompted serious discussions and reflections internally exploring how to further strengthen self-discipline and transparency. Despite the fact that the incident had nothing to do with our organization, we developed the principles of accountability, professionalism and virtue, which become our guidelines.

In the early years of Amity’s development, we focused on overseas publicity, as the majority of donations we received back then came from overseas. Consequently, many people at home did not know about what we did.

However, with more and more donations coming from home in recent years, we needed to gain the understanding, trust and support of all sectors of society and the public in China. Our employees did their utmost to demonstrate transparency and integrity, so that the people could better understand, trust and support us.

In short, whether it is the improvement of the philanthropic undertakings, or the development of social organizations and foundations, transparency and self-discipline should always be our guiding principles, because they are the lifeline of our work. Integrity has to be in our blood to ensure that our cause receives a steady stream of resources and support.

The development of a sector or an organization must first be analyzed from six aspects (i.e. PESTEL analysis): political, economic, socio-cultural, technological, environmental and legal. Only with this approach can we make correct assessments and find the best path for its development . And this path is not set in stone. It needs to be adjusted according to the changing environment.

For Amity Foundation, “Going Global” is not a new concept, although its definition has changed greatly over the years. At the beginning of the reform and opening up, there were many under-developed areas in China. When our friends from other countries visited those areas, they offered specialized resources to support local construction, sincerely with conditions attached. It was such support that led to the establishment of the Amity Foundation, which became a platform to receive these resources.

For Amity Foundation, the beginning of its establishment is accompanied by work both featuring “inviting in” and “going out”. On the one hand, we invite our partners to come to China to understand the domestic situation. At the same time, we also go out to learn about the world. This way, we can cooperate and confer with our partners on the best ways to eliminate poverty. So up until the beginning of this century, English proficiency had been one of the primary considerations for hiring at Amity. It is an indispensable skill for Amity’s projects, which frequently involve translation and coordination.

The main task of Amity Foundation is to act as a bridge or a conduit to bring in more resources to solve social problems, especially in China. The reason why I refer to Amity as a “special philanthropy zone” is that the government at that time, in order to develop the local economy, set aside land and established a number of “special economic zones”. In these areas, the government implemented preferential policies, allowing them to experiment . Amity Foundation was not a geographical concept, but an organization. We had a lot of overseas resources, as well as opportunities for overseas exchanges. These advantages at that time indeed helped us become a “special development zone”.

By “going global”, we learned from the experiences of developing and developed countries, and engaged in discussions on social issues. Thereby we gained deeper insight into their local situations and bolstering our interaction. My first trip was to the Philippines in the early 1990s. During that trip, I found that NGOs in the Philippines were very active in helping the poor at the bottom of society. I found this extremely meaningful.

In addition, what I saw in Kenya struck me the most. Down the street, you can see a slum on one side, and a fancy club on the other. It was hard for me to understand whether those rich people had any consideration for social justice when they played in the clubs, and whether they felt secure in terms of their personal interests. These observations have also helped me gain a deeper understanding about the world and become more calm when analyzing and thinking about social issues.

We Chinese know how to repay kindness. Amity started out as the recipient of aid from all over the world. Now we have to do our best to give back to the international community and fulfill our humanitarian responsibilities, which is also obligatory.

In the 1990s, Amity Foundation began to do some foreign aid projects within its capacity, such as bringing Chinese medicine and the technique of Chinese acupuncture to the Philippines. At the beginning of thist century they still came to us asking if we could send them more acupuncture needles.

You are donating to : Amity Then and Now: A Retrospective