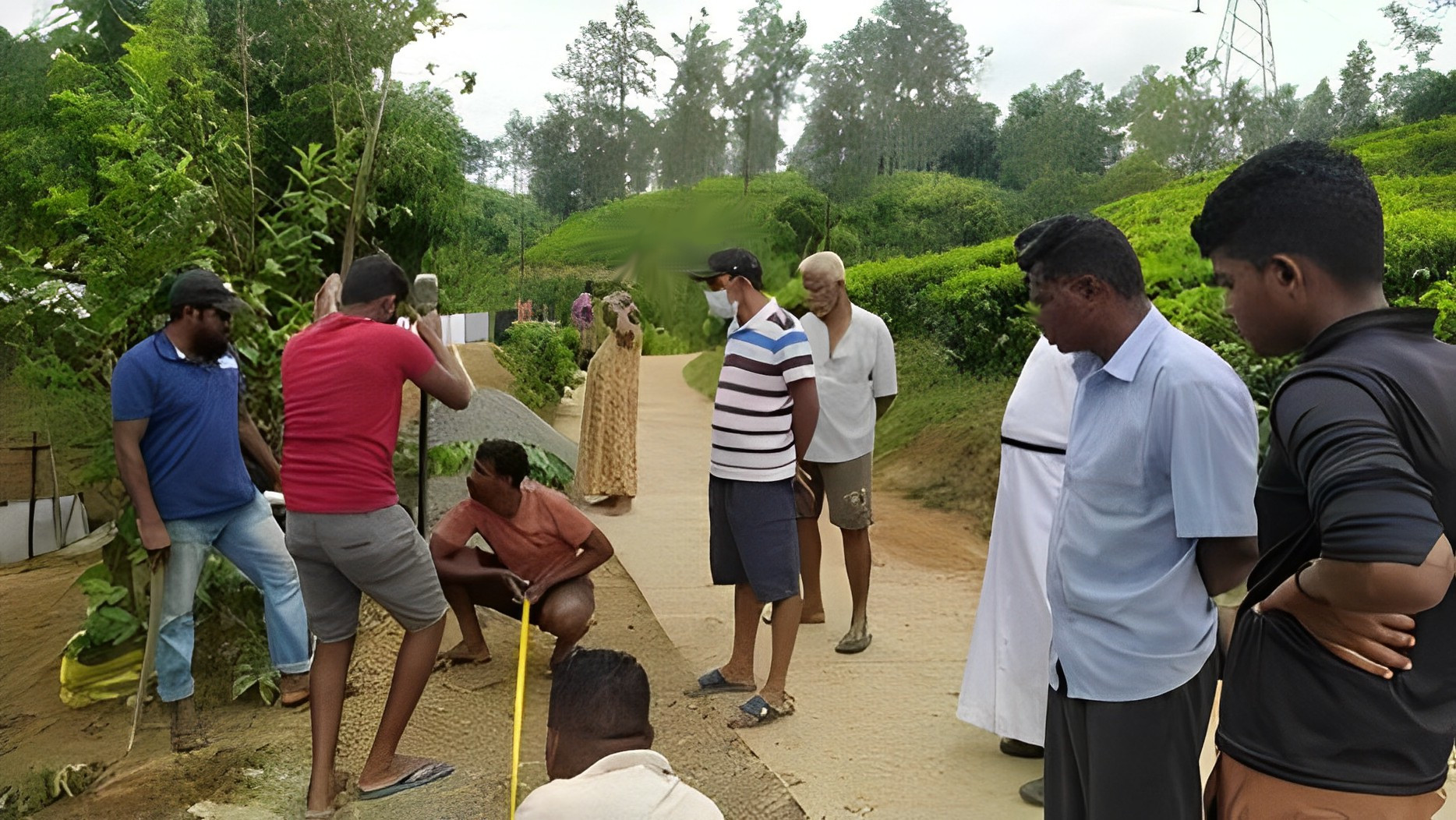 Since 2010, The Amity Foundation’s Living Water Campaign has been raising public awareness of the global water crisis and helping to implement water projects all over the world. In 2021, Amity partnered with the Board of Social Responsibility (BSR) and the Church of Ceylon in Sri Lanka, funding the construction of deep wells and water storage tanks in the Badulla district in Sri Lanka. Sivanu Sinnaiah tells the story behind the tea grown in Sri Lanka and how the Living Water Campaign’s project has brought hope to his community.

Sivanu Sinnaiah has been with the community for over 35 years on the Dyraaba Tea Estate in the Badulla district of Sri Lanka. Since 1914, it has had a succession of owners and managers, each with their own vision that later shaped the estate. The Estate lies at an altitude between 4,000 and 5,900 feet above sea level, which makes for excellent tea-growing conditions. Today, Dyraaba produces quality Black Ceylon Teas enjoyed around the world.

“Tea has a rich heritage, steeped in history and integral to the economy of Sri Lanka. Sri Lanka is world-famous for the quality of tea that has been produced through the ages. No two tea leaves share the same aroma and taste. Yet behind each cup of tea lies the story of untold hardship.”

“In the days of colonialism, a community left India for Sri Lanka, hoping for a better income and a brighter future for their children. It was an arduous journey on which they faced various pandemics and diseases that wiped out entire families. When they finally settled they were stripped of their rights and exploited by tea plantations for nearly 200 years. This community is hoping against hope that they could be assigned some land, have water to drink and some means to survive.”

Sivanu Sinnaiah has seen something beyond the tea industry – the lives of the people living in the Dyraaba Tea Estate owned by the leading plantation company in the country. We asked him some questions regarding the water project that was implemented for this community.

What was the people’s reaction for the water project ?

People were confused since not even the company they worked for ever asked the question of water or looked into their personal matters and out of nowhere this group (BSR) was interested in helping. They were happy, overjoyed when they received water. This was a dream come true. They never expected, they never thought that people even knew or cared for their situation. This came in as a total surprise. At a time when their day to day lives are faced with so many hardships, this was a miracle from God. The timing, the plan was perfect.

What was the highlight of the project?

I have seen various projects, but this was something that met the direct needs of the people. It is water we are talking about. How important is water to these people? They have been blessed. The people were not left out, this project got the families involved, it was a project that they worked among themselves. In fact, they are taking leadership to manage the entire project, they are excited not only have you given them water, you have also instilled belief in them regarding their own dignity and their own capacity.  For once they are people who are capable of not only plucking the two leaves and a bud, but capable of organizing, planning and managing something bigger than life. This will be a brilliant learning curve, even if there are some failures or difficulties the people will be able to sit around and resolve them. This is their water, this is their project and their effort.

Has the project made life easier for the people, how has it impacted the community?

People only had access to drinking water for some parts of the year, the well-used to dry up during windy seasons and also dry seasons. People had to purely depend on water bowsers that would provide them water in an ad hoc manner whenever it came. They had to collect water of days in these utensils and conserve the little drinking water available not sure when the next supply would reach them. Today they are receiving drinking water continuously. It has taken so many generations but finally they have water. This has additional health and safety benefits especially for the children and women who were the worst affected during acute water shortages.

What other sources of water did the community have access?

They had to travel around 3-4km to a little water way to wash clothes and for their bathing. I have seen mothers carry their children in one hand and another load of clothes in the other hand or on top of their heads going to the little spring. Most of their day was gone for this, this also seriously impacted the security and protection of young girls and women, was dangerous for little children and had its own perils. People accepted it as part of their lives. The risks and dangers were something that was part of their destiny they thought, and a pattern that continued through their childhood to their adult years.

Will the present water project serve the water needs of the community?

Yes, not only drinking water they would also have water for other requirements. This is such an important area for young girl and women. Finally, they will have privacy and feel safe. This will also help them during times of sickness, nights and during rainy weather.

What is the overall hygiene and sanitation situation?

There could be some improvements. Some have toilets while there are others who do not have toilets. Some may now look at the need for toilets as well.

What are the challenges apart from the economy /price escalation/inflation and COVID-19?

The estates are owned by Private companies and the lands of their line houses that they live are not owned by them. The government administrative system classifies these as private owned properties and would not get involved even when they have funds from various bi-lateral or multi-lateral grants. The worst is when you need to get approvals, there is no provision for owners of land to provide permission for constructions etc and even the management in the estate do not have the power over these matters since they personally do not own the properties but often owned by large public quoted companies. So administratively to obtain approval for work is a nightmare. The work in these estates take a longer duration than others. The people cannot directly approach the estate management and they need to approach through their trade unions that are now extremely political. So therefore any project has to negotiate between the government, the estate management and the trade unions. Each group is also worried about the repercussions they may have to face.

What are your final thoughts about the water project to a community in the Dyraaba estate ?

You are donating to : Tea of Life: Living Water For Sri Lanka