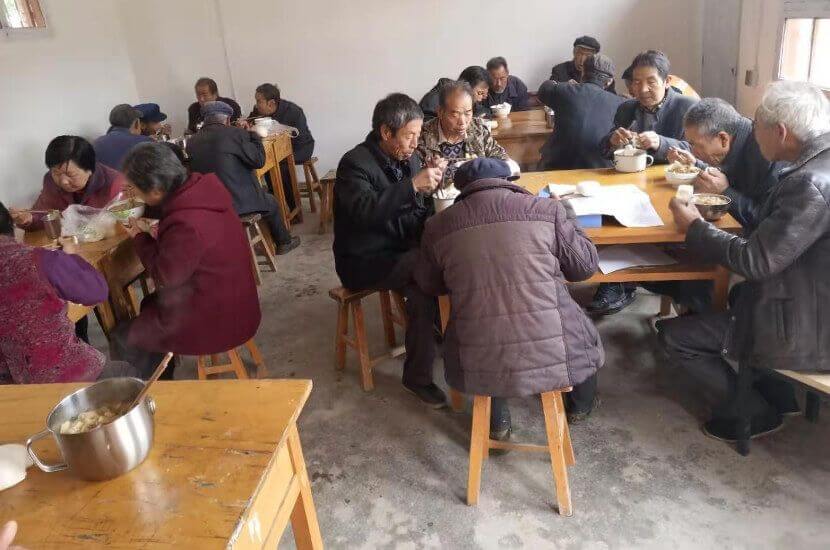 According to Amity’s research, young and strong labor continuously flock out of villages, with the elderly left behind in the mountains. For them, cooking three meals may become a burden. Amity cares about the basic living needs of these elderly. In order to make it easy for them to have a delicious and balanced meal, Amity proposed “Papa and Mama’s Canteen” project. The villagers worked together and improved a road through residents’ houses for the elderly to walk safely to the canteen. Finally, they transformed an elementary school into a warm canteen.

Every noon, aromatic scents of prepared meals filled the school. Canteen staff in uniforms distribute lunch one by one for the elderly. Once you open the lunch box, well-cooked cuisines with balanced meat and vegetables will make you hungry and make it feel like home.

“Papa and Mama’s Canteen provided the elderly with not only meals but also a feeling of ease.” Jing Lizhong, a staff member of the canteen told us. “We want them to know they are not left behind, and there are people far away caring for them.” He recalled that the other day an old couple didn’t come until very late. The canteen staff was Aromatic scent in the mountains preparing food packages and were about to deliver to where they live when the couple walked slowly into the canteen. Each of them carried a yellow plastic bag. They didn’t walk to the food table but went to the staff and put the plastic bags straight into their hands. “I opened the bag and saw a bag of peppers, spinach and green onion planted by the old couple themselves. They came late because they were carrying special gifts for us.” At that moment, Lizhong was moved to tears.

“Ever since Papa and Mama’s Canteen was implemented, changes have been taking place here every day: people tend to communicate more, relationships of villagers are becoming closer, and everybody is making more effort on helping each other. For me, I think this is the greatest meaning and value brought by Papa and Mama’s Canteen.”

You are donating to : Aromatic scent in the mountains