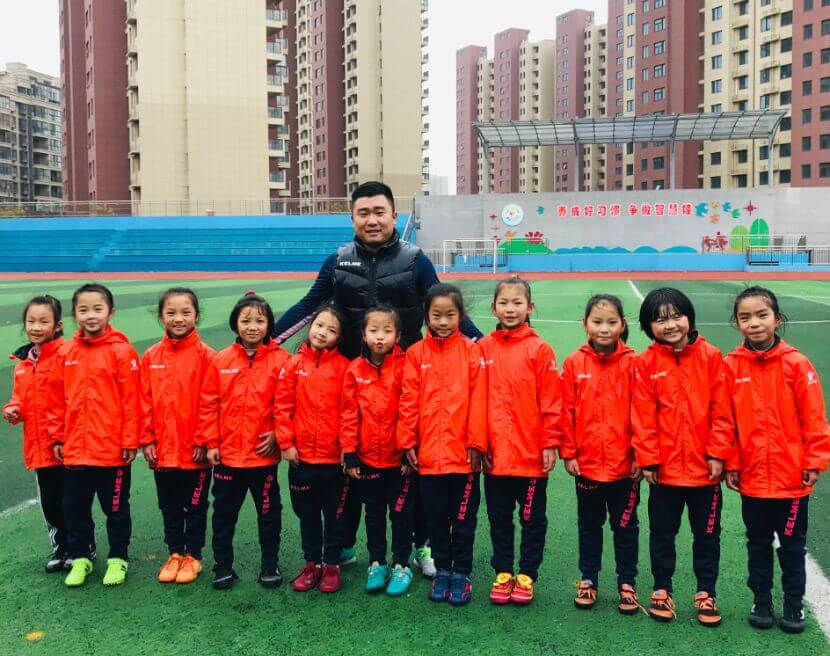 An Haoran coaches the girls’ soccer team at the Taishan Elementary School in the Pukou district of the city of Nanjing. Chubby and awkward, when he smiles his eyes curl into two thin black lines. He looks so gentle and harmless, a bit like a teddy bear, but just a few years ago, he was a rough and tough guy from the north-east of China with tattoos and hair brushed so it shone. When he first started coaching the girls’ team, An Haoran faced 16 little girls who were only about seven years old.

“Do you know what? When I first began, I didn’t start with learning how to teach these girls to kick a football, but rather how to help them do their hair. At first it was just a single ponytail or a pair of pigtails, but then when they ran, their hair would still bounce about and sometimes hit their faces. And so then I learned how to put their hair in a bun.” An Haoran laughed as he explained, “At first, I wasn’t prepared to help them, but the kids were always coming to me with shoelaces that needed tying or hair that needed tidying. When they stared at you with those big eyes and told you that they couldn’t do it, I didn’t have the heart to refuse.” And so, time after time, he looked after them. That’s how this guy, born after 1990, slowly became known as “The father of the team”.

Actually, once upon a time, An Haoran would never have thought of coaching a girls team from an elementary school. He was trained as a professional player and also worked as a coach for the D-grade team of the Chinese Football Association. Originally, he wanted to go further in his football career or coach a team with better skills, but this wasn’t possible because of an injury. “Actually, this turned into a kind of fixation for me. I was really disappointed that I couldn’t go further as a professional football player, and so I projected those hopes onto small children. They are like pieces of blank paper just waiting to be drawn upon.”

An Haoran knew well, however, that it wasn’t easy to get more girls playing football. “I think, though, that boys and girls are equal when it comes to football, and they should all have the opportunity to develop an interest in it. The first step is to have regular contact with the parents and to change their traditional ideas.” Apart from this, An Haoran talks with and cares for these ‘little angels’ during training with gentleness and a sense of equality, and tutors them in other subject areas as best he can too. The girls like Teacher An, and often secretly slip little gifts of yoghurt or snacks into the office for him. One time, An Haoran had to go to Fuyang for a week of training, and after he returned, the children rushed to him and hugged him. “It was at that moment that I felt that everything I had done for them was worth it,” An Haoran explained in earnest.

You are donating to : Boys and Girls are Equal