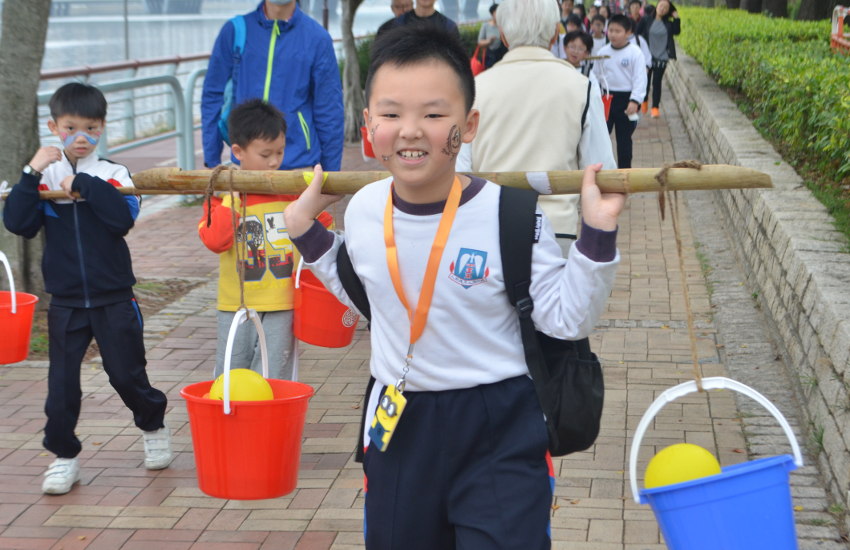 On 14th March 2015 I had the opportunity to attend the Amity Foundation’s 5th annual Walk for Living Water, held at the SKH Tsang Shiu Tim (TST) Secondary School in Hong Kong. It could so easily have turned out as many other sponsored walks, a fun and meaningful afternoon but forgotten once it’s over. However, two things happened beforehand which struck me as seriously ironic later in the day, and which served to heighten the significance of the experiences over the afternoon…and even now.

The first was when I realized, on my way to the venue, that I’d left my water bottle at home. Boo! Now I’d have to grab a bottle of water from the shop.  How easy it is to give no more thought to this necessity of life than to the cost of forking out a little money for the privilege of buying some. Such an irony, just one hour later, to be cheering on teams in a ‘Strong Man Contest’, representing the grueling challenge of carrying this precious commodity across the country and over obstacles without losing any of it.  It was a fun event to observe, but the contest pointed to a several-times-daily reality for many rural Chinese who live without clean water, let alone tap water or convenience stores. This significance was definitely not lost… a humbling moment, indeed, as I sipped fresh water from my store-bought bottle! Wonderful, then, to know that the events of the day were raising funds for the Amity Foundation’s projects to aid water-deprived communities in China.

It was also very encouraging to see lots of visitors taking part in the Hong Kong Water Supplies Department’s (WSD) “Water Saving Challenge”, especially popular with the primary and middle school students. Staff from the WSD were keen to support Amity’s conservation and sustainability programs for China, whilst at the same time encouraging the younger generations to use water responsibly in their own homes. This concern was echoed in the official opening speech by Mr. Enoch Lam Tin Sing, the Director of WSD, whose tips on water conservation set the tone for the rest of the proceedings.

Getting back to the ironies that struck me on the way to the Walk, the second incident was a conversation that morning with a local. She was bemoaning the divide between the people of Hong Kong and the Mainland, not in physical distance but in attitude towards each other. “There’s such division, and no attempt from either side to bridge the divide or try to see things from the other’s perspective”, she said with disappointment.  How I wish she could have seen what I saw as the events for the Walk for Living Water unfolded. What an encouragement it could have been for her to see the other side of the picture.

Hundreds of Hong Kong locals of all ages turned out in support of this mainland-based NGO, all with the same goal to raise as much money as possible to help make dramatic changes in the lives of the people of rural China. Many of them were also willing to carry burdens of water-filled buckets around the Shing Mun River in empathy with those Mainlanders living in remote areas who hike great distances every day to retrieve water for their daily needs.  Most encouraging, though, was that many participants were the next generation who could potentially influence social welfare in Hong Kong and beyond in the future. Yes, there may be some tensions between locals and Mainlanders, sadly considered more news- and gossip-worthy; but the Walk for Living Water was representative to me of a greater reality of compassion and collaboration bringing hope to both parties.

You are donating to : A walk as good on the heart as the legs