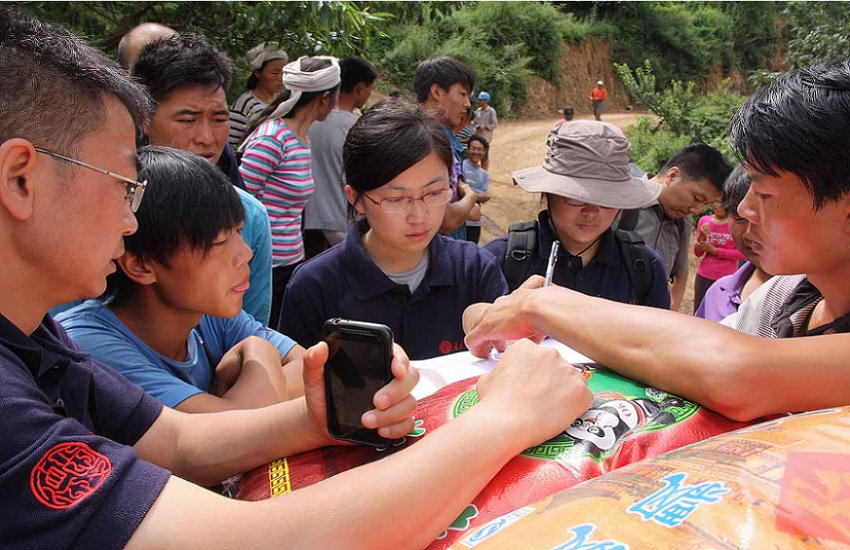 Guo Taiquan received the shocking news that his hometown, Ludian in the province of Yunnan, had been struck by an earthquake while he was at work in Kunming on the afternoon of August 3rd 2014. By evening, he and his brother, Guo Taijiang were on their way home to what was a badly affected area – Huodehong village in Ludian County.

“When we arrived, we found that our home had collapsed but our family members were all in emergency shelters; food and drink had been provided very quickly. We were at the foot of the mountain; there was only one cattle track up, it was raining and there were landslides. We had to carry food up in baskets strapped onto our backs.”

On the afternoon of August 5th, Amity Foundation’s second emergency relief shipment arrived at the distribution point above Honghuncun. Guo Taiquan and Guo Taijiang found the rescue team and asked to help with giving out relief and registrations. That is when Guo Taiquan also asked one of the rescue workers to take his photograph. “I want to send it to my friends so that they know that I am working hard to help people too,” Guo Taiqian explained.

The relief workers never saw the smile leave this young man’s face the whole time he worked with them. He said that he was proud to help the people from his own village. After all the emergency supplies had been distributed in that area, Guo Taiqian and Guo Taijiang joined the Amity Foundation emergency relief team as volunteers.

On August 6th, the Amity Foundation emergency relief team broke into two smaller groups to investigate the needs in two areas – one team went to Queluo and the other to Guangming. Early in the morning, Guo Taiqian and Guo Taijiang brought some other young men to the emergency relief team members. “We know the roads here; we’ll show you the way.”  These men, Guo Fei, Fu Xiangui, Li Quankuan and Zhang Yuanjin were from the same village as the Guo brothers. They had worked together with the Guo brothers in Kunming and had also come home as soon as they heard about the earthquake hitting their hometown. The previous evening, the Guo brothers had told them how they were serving as volunteers in the emergency relief team. They had decided to all come and help the relief workers that day.

The vehicles with the first Amity Foundation relief team which had left for the 18 communities in Guangming had to stop because the foundation of the road had sunk and large rocks blocked the way.  Guo Taiquan and Guo Fei rode motorbikes to investigate the situation in the 18 communities. They were very efficient; in just one hour they were able to ascertain the situation in villages 16, 17 and 18 and had collected registrations.

Guo Taiquan said, “My home was devastated in this disaster, just like their homes. I was really sad when I saw how things were, but apart from feeling sad, what could I do? I had to do something. My heart ached so badly when I saw those old people. I realized that we young people had to do something to help them. We had to rescue them!”

Guo Taiqian, a slender man from the mountains of Yunnan, is like many other young people in that he works away from home, earning money to provide for his family. He is just one of tens of thousands of people who have been affected by this disaster and who are still waiting for help. He and his brothers didn’t simply provide physical help to the rescue teams and those in the earthquake area. They loved their fellow villagers, they helped their own people, and they helped others. When they encountered those affected in Guangming, they thought of the pain their own community was going through. Guo Taiqian has now been given an important responsibility; he is now co-ordinating the distribution of relief provided through Amity Foundation to three communities within Guangming Village. Smiling, Guo Taiqian says, “My fellow countrymen need me.”

You are donating to : My fellow countrymen need me