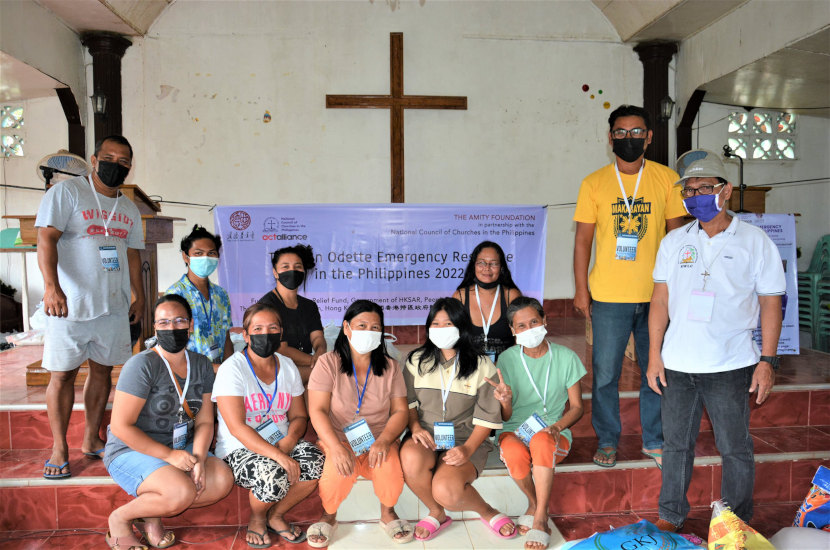 Super Typhoon Rai (locally known as Odette), which made its first landfall on December 16, 2021, on islands in the central parts of the Philippines, is the most destructive tropical cyclone in history, second only to the devastating Super Typhoon Haiyan (locally known as Yolanda) in 2013. In the aftermath of the natural disaster, The Amity Foundation (Amity) and the National Council of Churches in the Philippines (NCCP), both members of ACT Alliance, mounted a joint relief project to provide humanitarian aid to 9 barangays in 7 different municipalities in the Province of Southern Leyte, bringing timely and life-saving relief to over 10,000 most needy survivors.

With wind speeds reaching 195 km/h, Typhoon Rai brought torrential rains over two days, causing floods and landslides, and more than 400 casualties and widespread damage to mainly farming and fishing communities. Urgent needs for emergency supplies, including food and water, arose after the complete destruction of houses and livelihoods left thousands of people destitute.

Amity had been closely monitoring the development since the disaster took place. Dialogues and discussions between Amity and NCCP since December 22 led to a decision of a joint relief project. Throughout the Christmas holidays, NCCP conducted ground need assessment and proposed an initial relief plan. With first-hand needs analyses from NCCP, and leveraging the rich disaster-relief experience of Amity’s Nanjing Headquarters, Amity Hong Kong Office applied on December 26 to the Hong Kong Disaster Relief Fund. The donation was granted through the fast-track mechanism promptly. The Consulate General of the Philippines in Hong Kong issued a letter of appreciation in recognition of the quick responses on the part of both DRF and Amity Foundation.

Amity and NCCP are both members of the Christian ecumenical network ACT Alliance with 140 members working together to provide humanitarian aid and fund social development projects to people in need worldwide.

Amity has provided disaster relief to the Philippines for five times, including in the aftermath of Typhoon Haiyan (2013), Typhoon Mangkhut (2018) and Typhoon Vamco (2020).

NCCP’s work in the Philippines is backed through a country-wide local network, which not only includes NCCP member churches, but numerous ecumenical organizations and local community leaders. Such a network has proven to be particularly important in times of major disasters in this country, consisting of many island communities.

During implementation of the joint relief project, NCCP and its ecumenical partners had to overcome severe logistical challenges due to complete destruction of infrastructure and communication in the target areas. The urgency to deliver the supplies was hindered by a present surge of Covid-19 and the remoteness of the affected target communities, which could be only accessed through long trips on the road and exhausting boat rides spanning dozens of hours. Ultimately, the success of the operation owed much to the many hours of coordination and preparation with bottom-up contributions from local partners.

The joint relief project was able to leverage a supportive ecumenical network with 65 local churches and volunteer groups. Thanks to this network, the project delivered drinking water, rice, dried fish, canned food, beans, sugar, cooking oil to 2,360 households in Southern Leyte Province and completed all distribution on 19 January.

In a debriefing Zoom session involving personnel from the two ACT Alliance members, it was recognized that “collapsing into 16 days all the activities of coordination, identification of beneficiaries, canvassing and tendering of relief items, packaging, transport, organizing volunteers, putting Covid-19 security measures in place, and last but not least, ensuring all distribution be done in fair and just manners, was a major challenge of the program,” explained Ms Tong Su, the Project Coordinator of Amity Foundation Hong Kong.

Bishop Jerome Baris, Chairman of the Eastern Visayas Regional Ecumenical Council( EVREC) shared in the debriefing that the actual aid distribution operation was efficiently completed within 5 days. Through the coordinated effort the most vulnerable people in 9 barangays have been served.

Mr Edward Santos, Assistant Program Secretary of NCCP’s FWS Humanitarian Response division, and Mr Almond Del Rosario, NCCP’s Emergency Response Officer, braved the long and treacherous journeys to the affected areas in Southern Leyte from Metro Manila to coordinate and oversee the relief project. Both of them witnessed the vast scale of devastation and felt there was still a huge gap between aid already provided and what is still in need. When sharing his experience, Almond said: “My heart was melting as I told those who were not listed as beneficiaries that we could not help them because there were just too little resources.”

Anthony Tong, Executive Director of Amity Foundation Hong Kong, called the timely and successful implementation a miracle, as the ecumenical partnership between the two ACT Alliance member organizations shifted to a high gear in the face of multiple challenges due to the widespread destruction and Covid-19 Pandemic.

In this regard, this year’s unity statement of the NCCP and the Catholic Bishops’ Conference of the Philippines is relevant: “Christians must unite in solidarity with the most vulnerable among us. The Filipino people are in need of accompaniment and aid in these difficult times.”

(Photos have been provided by our local Philippine partner NCCP – if you want to support the people affected by Odette, you can donate here)